Not Your Typical Cat Story, Not at All 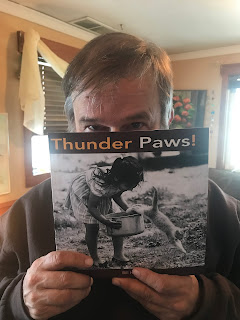 Now, I’m not much of a cat person, but when my good friend Bill Hess writes a cat book, I have to take note. Bill has been telling the stories of Arctic Alaska and its people for a long, long time and he is good at what he does—understatement. When Bill puts his heart into something, he does so with no holds barred.


Bill tells stories with his photos and creates pictures with his words. And he always tells the stories that touch us the most: Iñupiaq stories that go straight to the heart of the people and the culture.


His photos capture those special moments in the lives of people, their relationships, their families and their communities. Like this photo of a little boy, aspiring to the be an Iñupiaq drummer as his elders perform... 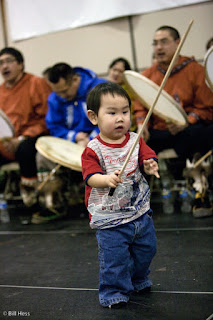 Or this one of Robin Demoski of Utqiaġvik, caught (with some pretty fast footwork) in the act of taking a photo of the photographer... 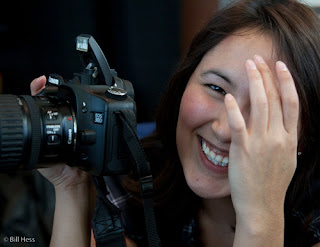 Or this one, which caught the eye of the world: Malik, one of our greatest whalers, saying goodbye to the gray whale trapped in the ice off the coast of Barrow in 1988, the story that inspired the movie Big Miracle.

….all the hunters, save one, turned and left. It was Malik who stayed. I knew I would be safe on the ice as long as I was with Malik. The picture I knew was coming had not yet happened. So I stayed with him. When Crossbeak rose, he was there to greet it.


Then, with his hallmark prose, Bill follows the string of photos that culminates with this photo,  telling the story of the great whaler and the trapped gray whales, frame by frame, caption by caption:

Malik walks alongside the whale, talks to the whale.


Together, they move farther along. Malik never ceases his conversation. He speaks Iñupiaq. His voice is calm, quiet.


Malik and whale reach the end of the hole.


They turn, and start to come back. Now Malik walks and talks with both whales.

Then, finally, and with restrained elegance of word and image:


You almost don’t need to see the string of photos to feel the heart of this story. But if you want to see them--and you do--read Bill’s version of The movie Big Miracle and what I witnessed in real life. You’ll see Bill in his element as an artist.


As a writer,  I’ve always been in complete awe of Bill’s dual talents. How can one have both the ability to capture a story with just the right photos snapped at exactly the right moment and the ability to add the words that frame the story behind the photos perfectly?


It’s a mystery. I once asked Bill which he liked best, photography or writing.  “That’s like asking me which I prefer my eyes or my ears,” Bill told me.


Now, here comes Bill with a book on cats—cats? Well, actually, no. Thunder Paws is not a generic cat book. It’s not your run-of-the-mill coffee table cat book, of which there are legions. This book is the unique story of one special cat and its relationship with one special family. Within a few short pages we meet the cat called Thunder Paws and watch how the family embraces its new feline child and how the cat child embraces and changes its family, growing, with the human children, into adulthood. It opens with these words:

Sometimes, the best cat is the cat you do not seek out; the cat that appears unexpectedly before you and, without trying, inserts itself deep into your heart, brings you warmth and pleasure, causes you to laugh with delight and to marvel at the wonder that is a cat. So great is the love generated by such a cat that when, unexpectedly, it is torn from you, its absence leaves you, and its whole host of human loved ones, grieving; yes - even weeping.

Thunder Paws was such a cat. 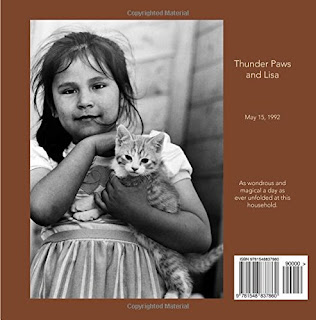 Bill has self-published this book and it is beautiful. Did I fail to mention that Bill is also a master at book layout and design? Yeah, well he is.

Thanks Bill. We want more.

Yes, the TOP of the world. Really.

my granddaughter Qilaavsuk is ready for snow!

My Name is Not Easy

Listen to an interview and reading of My Name is Not Easy with
Alaska's Public Radio's Laurie Townsend.